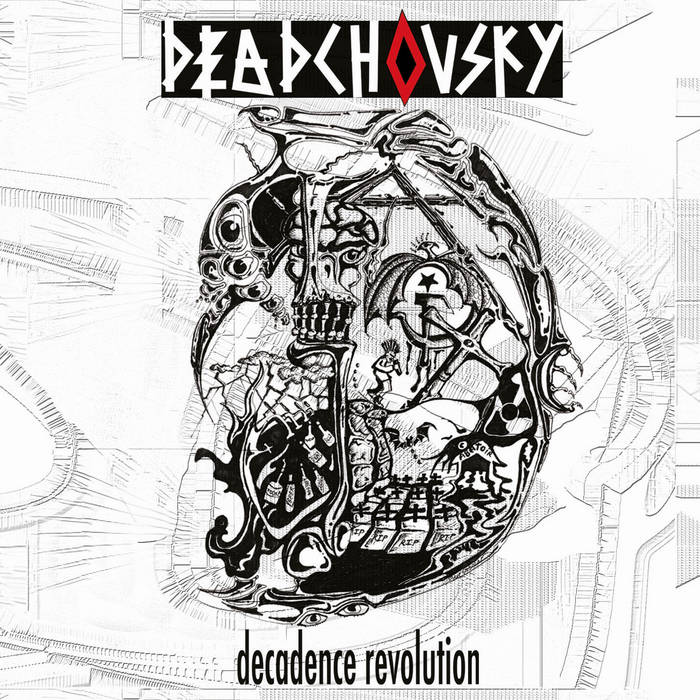 Wyrm Phood I love this album, Der Verfall, Alcool, Solene is a Batcave, Bacterium on the Drive, among other songs, just hit the right spot for me.
Favorite track: Der Verfall.

All began with Igor, the now famous beggar/prophet. No one knows who he is and where he comes from. Living in another dimension, he wanders across a fake Eastern Europe to spread the message of the decadence revolution. After drinking a bottle of cheap vodka, he discovers that his brain could help to transmit the message in the normal-third-dimension world.

In the end of the summer 2003, Lois John Slut (guitar) and Afterglauk (one-string-bass/one-vocal-chord) realise they are the hemispheres of Igor's brain. They are not totally conscious of this, but enough to leave the cold-wave band Trespass and to create Deadchovsky.

The very begining of Deadchovsky is a total nonsense: they record the track "Falling Curtain" to make a joke to Sleeping Children. They give the same track to Lionel of Manic Depression Records to make believe it was some polish/hungarian underground band. Then they use a picture of another band as their own on their website. But the project became serious...

In december 2003, Le Bab (keyboard) and Albator (drums) from the new-wave band Malaise Rouge (ex-Regard) joined the band. They recorded together the labyrinthic and dement "Decadence Revolution" LP which is released in October 2004 through Manic Depression Records (the only one who had the bollocks to sign Deadchovsky).

In March 2005, Le Bab and Albator leave the band and are replaced by Hellebore (Crimson Muddle) and Braen X Divarre (Alternative Zero, ex-Trespass, Castrati) who quickly reach the brain.

After some gigs in Europe with bands such as Clan of Xymox, Ausgang, Sleeping Children, Jacquy Bitch... Deadchovsky is planning to record the second LP: "Spiritus Sancti Bizarre" (still with the drunken ravens of Manic Depression Records) and to play more and more everywhere!